This is the last of a three part series of photos from my 3200 mile road trip up the ALCAN from Colorado to Cordova Alaska.  When we left off, I was just leaving Whitehorse, Yukon.  This is where the road really starts getting interesting.  Well, not so much interesting as rough.

Just before the road got bad I stopped and got gas at mile 1083 of the ALCAN,  Destruction Bay.  I couldn't resist buying the following magnet:


Alaska Highway
Winding In And Winding Out
Fills My Mind With Serious Doubt
As To Whether The Lout
Who Built This Route
Was Going To Hell
Or Coming Out!

Is that foreshadowing enough for the road condition?  And that's just the road, never mind the snow on it! From all the freezing and thawing the road just gets bumpy, not pot hole bumpy but maybe lumpy is a better description.

It only took me a second to wonder what those orange cones on the side of the road were for.  And in that second, despite slamming on the breaks and repacking my load like I was cuing up for pool, the Focus launched off a bump in the road that I didn't see coming in the flat light.  Next thing I know I'm flying through the air all Bo & Luke Duke style.  I did the only thing that could be done in that situation, I let out a big Yeeeeehaaaaw!


Dips, turns and the occasional launches aside, it is really a beautiful drive. 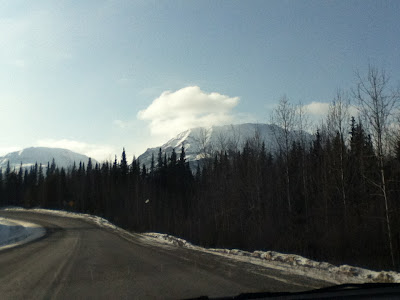 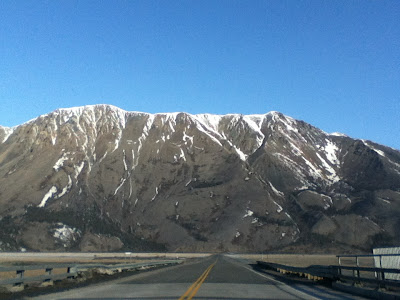 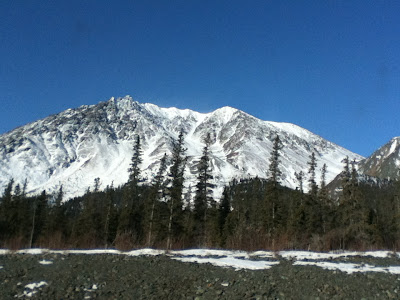 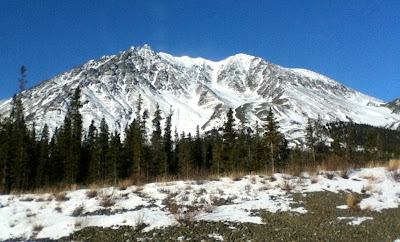 This is part two of a three part series photo essay of driving north along the historic Alaska Canadian Highway, aka ALCAN.  Last week, I took you are far north as Jasper National Forest in Alberta Canada.  Today we pick up where we left off in Banff and head to Whitehorse, Yukon.

From Jasper, I took route 40, a small two lane highway north bypassing Edmonton.  I heard later on the news that there was a four and half hour ice storm in Edmonton that shut the city down for hours!  I saw pictures, too.  They had front end loaders schleping that shite around.  Not bummed I missed that!

Highway 40 took me to Route 1, I think it is, in Grande Prairie, Alberta.  I felt like such a cliche at the intersection waiting for the light to turn green to make my left hand turn.  Even though I was still days  away from the border, let alone who knows how many miles, there was a sign that said "ALASKA".  So there I was, my little white car with my practically neon yellow "Alaska" plates, all loaded down to the gills, turning left towards Alaska.

Though I avoided the ice storms, I wasn't entirely out of the woods.  I still had a few inches of snow to deal with.  Not a show stopper, but enough to notice after about six or eight hours of driving.

We are  two-thirds the way there!  Tune in next week and we'll finish the trip!

ALCAN PI-REP.  That the Alaska Canadian highway pilot's report in plain English.  I just did the 3200 mile drive from Denver to Cordova, AK and got in a few nights ago.

I think for the most part, I squirted between weather systems and didn't really get caught in any of them.  For the most part.  I started off the trip in a t-shirt and shorts and ended it a week and 12 hours later having to  walk the last two ice covered blocks.  But I don't want to get ahead of myself, first things first.

First thing I did was, I got lost the first 10 minutes of the trip, before I even got out of Denver.  I missed my exit and got all turned around when trying to turn around. I had to call my friend Kerry, a GIS guru, and she said "Well, what does your GPS tell you to do?"  "GPS?" I exclaimed, "I don't have it on.  I was just gonna drive up to Montana and hang a left."

Once Kerry got me going in the right direction, I was all good.  I drove north to Montana and hung at left as planned.  Then took a right and drove on into Canada.  The first few days were fairly uneventful.

I decided that, this being my 4th trip on the ALCAN, I should stop along the way to smell the roses, AKA drive the route from Banff, Alberta to Jasper National Park.  SPECTACULAR!  But don't take my word for it, see for yourself in the following photos I did take time to take. Tune in next week for photos from the rest of the trip north to Alaska, including the 3 feet of snow Valdez got in 48 hours! 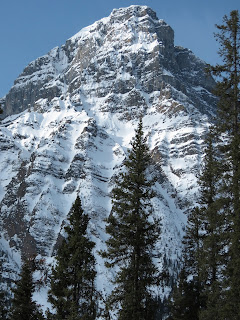