At last!  Photo highlights from my Bristol Bay season aboard the f/v Fischer.  The last you heard from me I was heading west to gillnet Bristol Bay back in June.  Admittedly, I know there has been radio silence from me for some time, my apologies.   I've been back from the Bay for a few weeks now but was off on my next venture already, without time to write or internet connection.  I have been gearing up to write a post but dragging my anchor on it.  However, today I ran into my buddy Dan at Costco and he guilted me into submission and told me I need to update my blog.  So here ya go, the Bristol Bay report.

I had a good season. We fished Naknek and Egegik.  The weather was (mostly) nice, the crew was (mostly) nice, (OK, that's a lie, but I'm trying to be nice, more scuttlebutt on that later), the skipper had his shit together, and though there weren't a ton of fish around, we managed to scrape up a few.  The price had jumped from $1.00 a pound last year to $1.50 a pound, so that helped.   Shoots, last time I fished out there, back in 2006, it was .70 cents a pound, so I can't complain. Really, I can't complain,  I signed a waiver.  Haha, just kidding.  Actually, there wasn't much to complain about, I had a blast out there! We'll, I can find a few things to complain about, but I'll have to fill you in bit by bit, otherwise, we'll be swamped.  So I'll start by showing you the boat I was on and introducing you to most of the crew.  Without further ado, the f/v Fischer.


As you can see here, going dry is a common occurrence out in the Bay, too.  We were running in after an opener and missed the channel, just slightly, by about 20 feet.  Skipper said he knew it was around here somewhere. So close.... It was blowing about 40 out and kind of lumpy, so being on solid ground was a nice treat.  Until we had some mending to do.   Dry or not, mending gear in a gale is no fun.  But, I digress. Enjoy the photos and my little video.  Its my first attempt at downloading a vid, I hope it works. 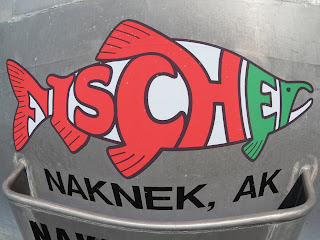 This is the first of my Bay report.  More to dribble in soon.  Until then, go slime a salmon!

Thanks Fisher. I really enjoyed your post. I love you
Auntie, Mary

Back in '86 I worked at the Alaska salmon canneries during the Summer and a fellow from California was selling tshirts with the phrase: "Go slime a Salmon!" I noticed you are a very rare exception in the internet that uses it and I forgot what it means. Could you please enlighten me? I still have the tshirt and it still fits me! Thx.

The conveyer line in the cannery that the salmon comes down for cleaning is called the "slime line". When you "slime" a salmon, you clean it. Go slime a salmon means go clean a salmon.

I remember those shirts! You don't see them around much anymore so hold on to it and wear it with pride! Its a classic.