Which has really been more of just an ass kicker,  than ass kickin.  This past week especially, when not one but two storm systems swept through Alaska.  They gave the seas out west of the Aleutian chain 70-knot winds and 17’ seas.  They ripped through the Anchorage bowl earlier this week with 100+ MPH winds tearing out trees, flipping small planes and left 30,000 people without electricity.   Three days later, some 4000 homes are still without power (http://www.adn.com/2012/09/06/2613732/thousands-still-without-power.html).


By the time these storms got to us on the Central Gulf Coast, Prince William Sound and the Copper River Flats, it was merely blowing a steady but relentless 40 knots or so.  Of course, this was Monday and there was a silver opener so guys and gals were out fishing.  Most fishing boats faired without too much harm, just tales of close calls of sailing down the channel while picking up the net, catching trees, snagging down and ripping up.  Most guys stayed inside the protection of the barrier islands instead of fishing out in the open ocean where seas were probably over 10 or 15 feet, at least.

The tenders, on the other hand, don’t have the luxury of staying inside.  Their deep drafts prevent them from running all the way to the east end of the fishing grounds inside so they are forced out into the open ocean.  Also, once they have fish on board, they are pretty much committed to getting those fish back to town.  So, come hell or high water, or both at the same time, they usually go.

One tender, the Alaskan Pacific can attest to that. Coming out of the Bering River, the east end of the fishing grounds, they took a “30 year wave” one that ages you 30 years in an instant.  That wave that broke out both front windows and knocked both guys out of their helm seats.  Their windows must be about 12 feet or so above the water line and they said two-thirds of this wave completely washed over them.  It probably would have flipped a bowpicker like a toy in the tub.  I don’t know what electronics it knocked out, but I know they were lucky enough that it didn’t drown the mains so they were able to come in under their own power.  A 65 nautical mile run in big seas and 40 knot winds with no front windows.  No thank you!  They made it to town all right patched themselves up with plywood and Plexiglas and went back out, in still shitty weather, to buy more fish for Thursday’s opener. 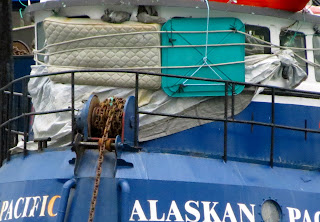 Usually, it’s the little bowpickers that get their asses kicked, this week it was the bigger boats.

The Sound Pacer, an 80 foot tender with a green skipper was following fellow tender Tamar into Soft Tuk on the east end of the Flats this last opener, a place where this skipper had never been, with this boat anyhow.   The boat hadn’t been there either this year so the GPS didn’t have any current track lines.  These channels change on an annual basis, so there are no current nautical charts and track lines need to be changed every season.

After a snotty crossing on the Flats they finally duck into Soft Tuk, missed the channel and promptly ran aground.   They dented in their keel coolers and over heated an engine while getting pummeled by breakers.  Breakers that ripped off their rudder and caused them to start taking on water.  Hopefully, this all happened to the same engine so at least they would still have one engine and could limp off the sand bar when the tide came in.

Last I heard, which was last night, everyone was OK and the pumps were able to keep up with the incoming water. They were able to limp in under one engine and were up on the grid last night!

But fishing boats weren’t the only ones getting their asses handed to them this week.  The Chenega, our 220’ ferry on the Alaska Marine Highway took a pounding last Sunday crossing Prince William Sound from Whittier to Cordova, with 50 Girl Scouts on board.  Evidently, everyone was seasick and they didn’t slow down while getting hit with wave after wave.  They took such a pounding that structural damage was caused!  As of yesterday, September 6th, inspections reveals that further welding to the framing will be required to meet regulatory standards.  The vessel has been out of commission all week and the soonest estimated date of service is Monday, September 10th.  We rely on the ferry for transportation of not only people, but also cargo (such as salmon) in and out of town, produce and groceries.
You can keep posted on that at https://www.facebook.com/cordovabuzz?ref=ts

you do a great job jen

Thanks Rexdog! I'm always happy to hear from readers and I'm glad you are enjoying it. Thanks for the comment!