Pics from the sailing trip (take 3) 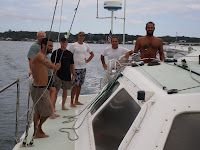 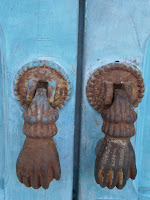 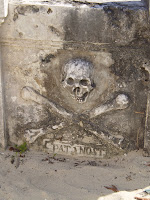 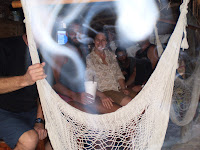 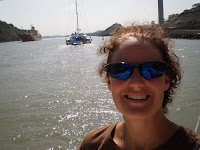 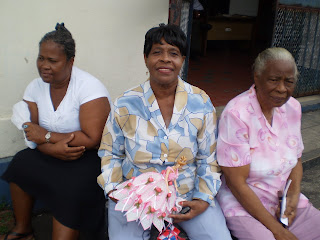 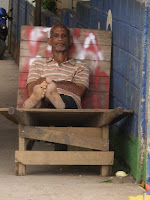 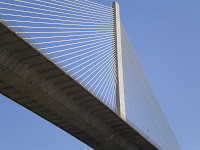 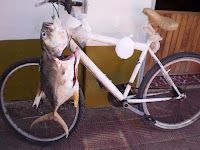 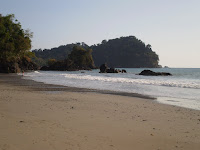 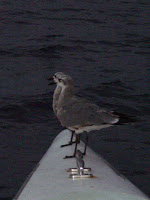 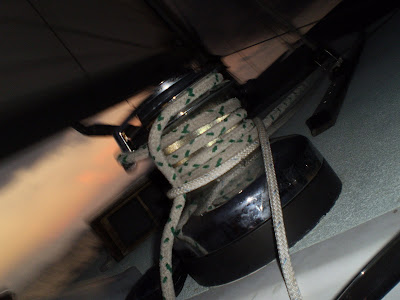 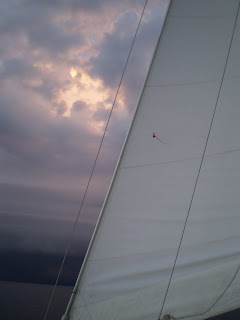 Obviously, the proof is in the puddin'. I don't know how to post pics. But, perseverance, my friend. I will try again. If I could just will the text to come first........or figure out how to add the text after I posted a picture. Or, even, figure out how to add anything after I accidentally hit 'preview'. OK, so technology is not my forte, nor my friend right now. Neither is organizing my sock drawer. But hey, I get by.
So pics are of: The Crew. A pirates grave in Isla Mujeres, Mexico. Door knobs, Mexico. Portrait from a Smoker. Mama's of Colon, Panama. Self Portrait in front of the Centennial bridge (formerly known as the Bridge of America). A man relaxing in Roatan, Honduras. Fish delivery in Quepos, Costa Rica. The Centennial Bridge. Beach in Costa Rica. Stowaways. Cleat during a squall. Sails.

So, these photos will be out of order and sans explanatory text, so it is up to you, dear reader, to go that extra mile and put the pieces together yourself. I know I am asking a lot, but I have full confidence that you can handle that task. I know we are used to having everything spelled out for us these days, and it is my job as a writer to make things easy peasy for you. So please forgive me for dropping the ball this one time. Besides, this could be a new adventure for you. But, as I said, I have full confidence in you. More so than I do in myself on figuring out this task. I'm already over it.
Posted by Jen Pickett at 7:33 AM No comments:

Pics from the sailing trip (take 2) 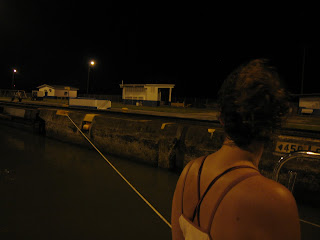 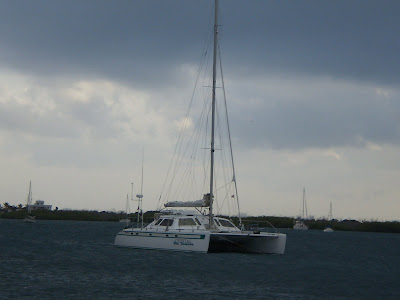 Sorry folks if you got all excited by the titles promising pictures of my trip to see only two. Technical difficulties on my end. However, I believe I have them sussed out and can now deliver what I promised. Pictures! But, the proof is in the puddin'!

Posted by Jen Pickett at 7:13 AM No comments:

I went from latitude 61 down to 7. Jimmy Buffet was right! Changes in latitude are changes in attitude! I went one month without wearing shoes! And loved it! Now when I walk out my door and look under my carport, my world seems so ugly compared to walking out the door and seeing the ocean everyday for 5 weeks straight.
5 weeks ago I found myself on a 55 foot catamaran in Isla Mujeres, a small island off the coast of Mexico near Cancun. I found this boat from my new favorite website: findacrew.net. The skipper, Gary (though since he is a sailor, he refers to himself as captain. Just one of a few distinctions between commercial fisherman and recreational sailors. To call a commercial fisherman a captain is a bit on an insult. Not as bad as calling one a cowboy, that’s the ultimate. (Who tied up this boat, a cowboy?) But, still an insult. But not in the sailing world. A captain is a captain, one in charge, so there is pride in it. I can’t explain, only convey.)
Anyway, I was already heading down to the Yucatan when I saw this boat was looking for crew. I partially said yes, but wanted to check out the boat before I got onboard. All I knew of the crew was Capt Gary and Bill from Vegas. Oh, that Bill.
So, after several days of travel (coming from Alaska, you can’t get there from here) I arrived Cancun. Took a bus, a taxi, a ferry and met the two of them at the ferry terminal. I told them they could recognize me from my Alaskan tan and red backpack. When I met them, they seemed normal enough. We walked down to a cement pier with a little skiff tied to it. We hopped in and Gary (the Mexican outboard) rowed us to the s/v (sailing vessel for those still learning nautical terms) Crystal Blue Persuasion. I looked clean and sturdy enough. I said “Yes! I’ll do it”.
The plan was to sail down the coast of the Caribbean side of Central America, through the Panama Canal, then back up the Pacific Coast. The boat was going back to California. I didn’t have that much time, but committed to 10 days.
The three of us hung out in Isla a few days and drummed up a few more crew. Then, on to Cozumel and then Mahahual, Mexico. We picked up a few more, lost one then took off for Utilia, Honduras. We picked up one more, and now we were 7. From there, we sailed to Roatan, the next island over. We were only going to stay a day, but the Port Captain there wouldn’t let us leave for some unknown reason. He kept telling us the weather was too bad. 4 or 5 days later, we finally had our clearance.
We had good winds and headed south to Shelter Bay Marina near Colon Panama, a very dodgy town. From there, went through about a mile of red tape and finally had clearance for the Panama Canal! This was the part of the trip we were all waiting for!
The first night we went through the first set of locks. There are 3 locks and each lock raises you up about 27 feet. It’s quite exciting! I was one of the line handlers that first night. Mostly just pulling in slack as we go up. Sounds easy enough, but there is a lot of tension on those lines. Careful not to get your fingers pinched. Plus, we were rafted up to a brand new 1.8 million dollar catamaran with a French crew. It’s tricky to keep everyone heading in a straight line. We almost crashed against the cement wall only once.
From there, we anchored in Gutan Lake, the largest manmade lake in the world. When we pulled the anchor the next morning, it was hung up on a tree or something. We finally got it up, but tweaked the mast about 10 degrees in the process. It took several hours to traverse the lake. It’s probably a lot like being on the Audubon on a bike. A 55 foot boat seems very small compared to 1000 foot cargo ships. The most narrow spot of the channel is 400 feet. But we made it to the second set of locks. It’s the same process, only in reverse. Each lock drops you down about 27 feet then you are on the Pacific.
This time is was daylight and there are webcams. It was super cool because I could chat with my sister on Facebook as she watched us go through!
From there we stopped near Panama City for the day and most of the crew ended taking off in every direction, as travelers tend to do. We were down to the 3 original amigos, me, Gary, and Bill from Vegas. My 10 days turned into 5 weeks!
We very quickly learned how the Pacific Ocean got its name. Something I never knew, having only experienced it in Alaska., where at times it is anything but passive! We could literally jump off the boat and swim faster than we were sailing at times. I was about 3 miles off the shore from Costa Rica when my flight for home left Cancun. When I miss a flight, I miss a flight!
But, I did eventually find my way back home. And I already miss the ocean. As I mentioned, the city seems so ugly now. There is something very primal about being on the ocean. Your day consist of food, shelter, safety, and weather. Nothing else much matters. Life in the city seems to trivial now…….