Can you friggin' believe it?  Some twits from Maine corked me on my own book title.  I saw it in this month's National Fisherman or some fish rag.  We were running, Gordon was driving and all the sudden I yelled some free flowing litany of curse words.  So much the Gordon stopped the boat to see what was wrong. "Someone stole my book title!!!"  Gordon didn't respond, he just reved 'er back up againkept running.  The book, Fish Tales: Sustainable fish, blabla and Recipes or something to that affect is about just that, I guess.  I couldn't bring myself to read the rest of the article, I was too pissed off and assume that they found my blog here and stole my idea.  Oh well, I'm over it now.  I'll just have to come up with a sexier title.  I also decided to nix the idea of putting recipes in my book, thinking now that its just too namby-pamby.  My book will be more gruff-n-X-tra-Tuff than that.  I don't think those guys are even fisherman.  On the flip side, there is a book out, by actual fisherman called "Fishes and Dishes".  These gals, who I met years ago in SouthEast, crab, pot fish cod, tender and whatnot wrote a fishing cookbook.  It can be found at http://www.fishesanddishes.com/.
OK, moving on.  I've been fishing the Copper River Flats since mid May now and the fishery is in full swing.  It's now wide open and we are fishing two 60 hour periods a week.  This is just one of the many changes since I last fished here.  Back then, a 48 hour period was about the longest we would have to endure.  Now, for those of you who have not done the math yet, two 60 hour a week openers puts you at a minimum of a 120 hour work week.  That makes for a grog filled head, to say the least.  And my left pinky does this weird twichy thing which I find very annoying.
Fisherman are never happy, we always have something to wine about.  Not enough fishing time, too much fishing time.  Whatever.  So, we fished our 60 hours, went to town.  Left the next day for another 60 hours.  Went to town for less than 12 hours and went for another 60 hours.  Lack of sleep starts to set in and a sub-humanness starts to take over.  You get this 1000 yard stare.  Tempers flare.  And you start not to care.  Everything rhymes, every time.  Ok, enuf.  Where's my Xtra-Tuff?  But, skipper decided we needed an R&R, go to the bank, and other things we haven't been able to do for weeks.  So we took of yesterday and ran to town.  I got home and found that I literally didn't even know what to do with myself.  I was tired, hungry and is desperate need of a shower.  So the question is, which do you do first?  I didn't know, so I had a beer.  Then I wandered down to my friends house for a shower.  Ran into a fellow fisherman who was done for the season.  He fished Prince William Sound, where they were fishing a 60 followed by a 84.  That leaves 12 hours between openers.  He had had a few days to rest up and regroup.  He understood where I was and offered to make me dinner.  We had this incredible meal of mashed sweet potatoes, tri-tips on the grill, this killer blue cheese and avocado salad and a nice red wine.  Thanks Mark!!  That super hit the spot.  Soon after, I took a 11 hour coma.  When I work I had an amazingly strong cup of coffee and am on my way to reducing my 1000 yard stare.  I think I'm about at the 350 yard line now.  By tomorrow, I should be right as rain.  Just in time to go out and do it again!
But before I go, I want to try to share with you some photos from the Flats. 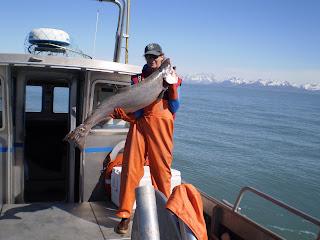 Jen and a King Salmon
Posted by Jen Pickett at 2:31 PM No comments: