Anchored Down in Anchorage

After spending the last five months or so in Cordova, I'm back in the big city.  It's quite a transition to be back.  Driving here is the hardest to get used to.  Compared to other cities, Anchorage is relatively mild to drive around, we don't even have any freeways.  However, compared to Cordova, where there isn't even one traffic light, Anchorage might as well be the moon.  I feel like I'm racing around like Mario Andretti, yet cars are passing me like I'm standing still.  And I miss the beauty of Cordova.  But, I don't miss the rain.  Don't get me wrong, it is good to be back, it's just taking some getting used to.

And I have been writing more.  Writing lots, actually.  And reading and writing and  rewriting and rewriting and rewriting.  I'm also pleasantly neurotic now, so I must be making headway as a writer.  I keep thinking "who would ever want to read this shit?"  So, from what I understand from other writers, I'm right on track.  Unless, I am actually right and every word that I have ever uttered is all garbage, then what?  Well, this is when I lie to myself and say it's not that bad and keep writing anyway.  I try to ignore the little voice in my head that tells me, with every letter that I type, that its all horse shit. I continue to ignore that little voice that gets louder, also with every letter I type, until it sounds like Tom Waits is singing with a megaphone and I hope the neighbors don't call the cops on me as I'm sure this voice is real and making quite a ruckus.    But then I think if the cops did come and arrest me, that would be a welcome distraction from this cycle of nonsense I am engaged in.  Oh sure, there are times when I am at peace with all of this, like the other night when I got so drunk I couldn't remember my own name.  I was quite pleasantly oblivious of that little voice then. :)  Anyway, I'll keep typing and keep yelling "Shut-up!" until they come to take me away.

Good news!  I found a mentor.  Though, he doesn't know he is my mentor, unless he reads my blog.  He is an old boss, well, I only worked for him for about 4 days.  It was back in about '94 or '95 when Prince William Sound opened up for herring for the first time since the 1989 Exxon Valdez Oil Spill.  Everyone was all excited and everyone showed up.  Everyone, except, unfortunately, the herring.  It was a total bust and the Alaska Department of Fish and Game shut it down and has not reopened it since.

The boat I worked on was the Quinn Delta and the skipper's name is Mark.  As fate would have it, I bumped into Mark this summer while in Cordova.  I think it was the first time I'd seen him since that dismal herring opener.  We visited and caught up with each other.  Turns out, Mark and his wife Nancy have been sailing all over the place for the past ten years or so and writing about it.  They even sailed around Antarctica. You can check out their blog for yourself at: http://www.krillroye.blogspot.com/.  Its good stuff.  Anyway, I told Mark what I was up to, writing and what not.  Since then he's been kind enough to give me advice on writing, trying to point me in the right direction and the like.  He even did some editing for me!  Check it out.


A FISHERMAN’S COMMUTE
It’s obscenely early on a Monday morning, what’s likely to be a typical fishing day.  My alarm sounds-off at 4:00 am, but it barely gets in a single ring before I bound from the bed, my feet landing on the cold wooden floor of my tiny rented room at the old abandoned cannery now known as Fisherman’s Camp.  Stumbling around as quietly as possible so as not to disturb my neighbors on the other sides of the paper-thin walls, I gather up the clothes I’d laid out the night before: a blood stained sweatshirt and course brown-duck Carhart jeans, oil stained and rent with holes from battery acid, a product of the endless maintenance that is much of a fisherman’s daily work.  Cold as I pull them on, my simple raiment puts me in the fishing mood as I tip-toe down the dark oiled wood hallway, willing my footsteps to be silent.  Silent not in consideration of my neighbors, but of stealth.  Just as one pulls up the anchor as quietly as possible to steal away from the anchorage, I slip out the door, hoping to leave unnoticed in order to get a head start.
My car, a well traveled ‘82 Subaru with faux zebra-skin seat covers and luminescent stars pasted on the headliner that I’d bought from a sixteen year old girl whose dreams of luxury could never be satisfied by such conveyance, starts instantly with the push of a button.  The faulty ignition switch had long since been replaced by fisherman’s ingenuity.  But my concerted efforts at stealth prove futile.  The engine roars to life, greeting the day’s work through an exhaust system nearly as full of holes as my jeans. I put it in reverse and hear the rumble of the wooden planks of the pier on which the old cannery has stood for decades.  Fearing I’d just awakened the entire camp, I finally turn on to the paved road and head for the harbor in the pitch dark, a full constellation of paste-on stars glowing above my head.  This is the time I love the best because of the stillness. I find it  consuming and comforting.  I pause and savor the tranquil moment, knowing that all too well my world will soon be in constant motion from the instant I step onto my boat until I tie up again secure in my slip.    But for now the succlent moss and trees of the dense forest of Prince William Sound are an eerie, unnaturally dark green.    The town remains still and quiet.  Mount Eccles stands above me on the left, the ocean lies beside me to my right.............
Posted by Jen Pickett at 11:33 AM No comments: 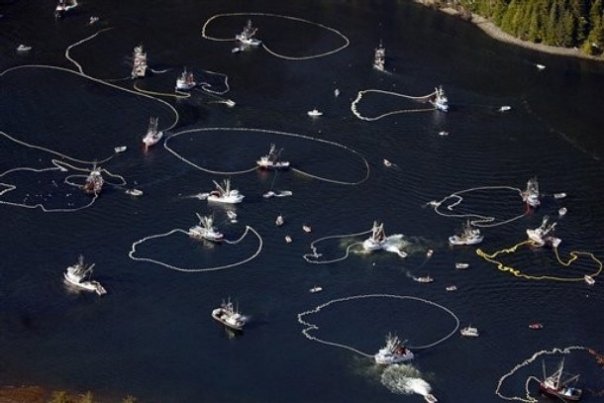 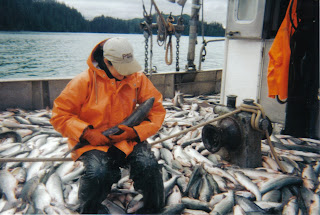 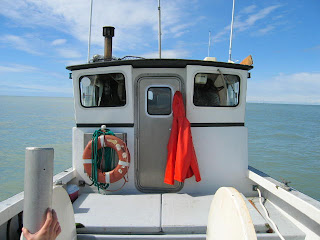 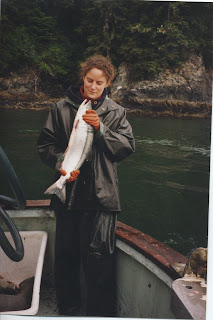 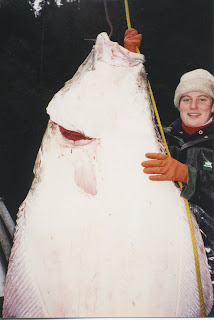 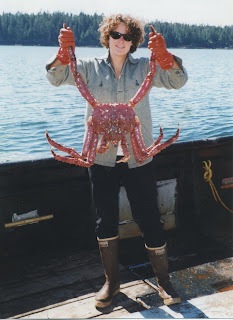 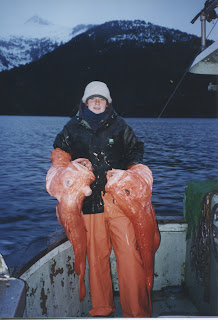 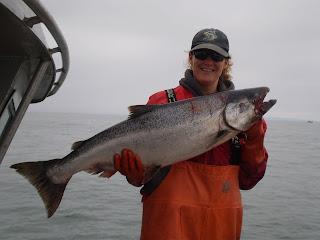 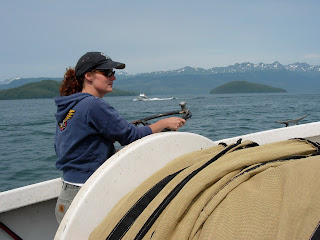 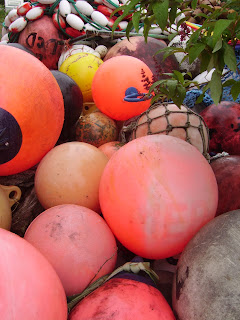 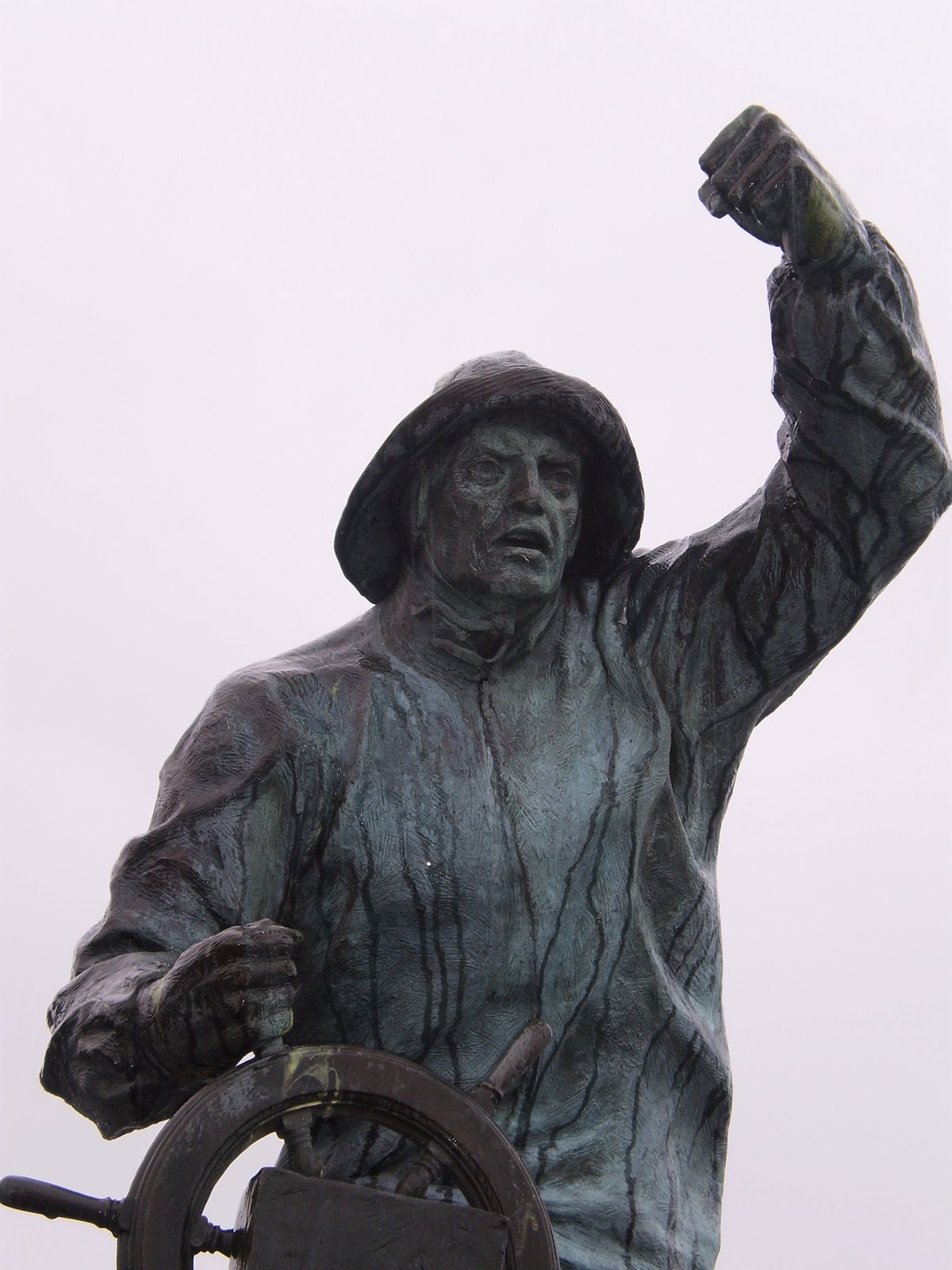 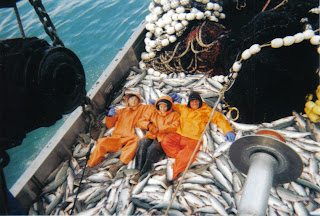 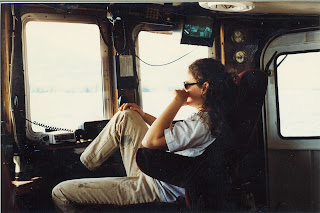 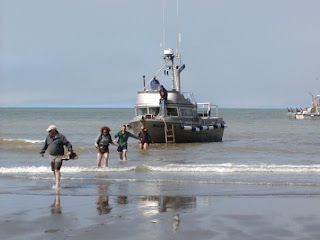 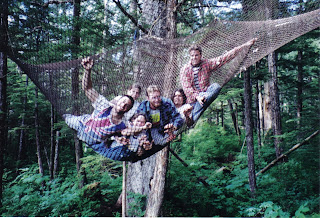