I started fishing this year May 15th, give or take.  The reds came in like gang-busters here on the Copper River.  The price stayed OK.  It started around $3.65/5.50lb for reds and kings and ended about $1.60 for reds.  Silvers were about $1.30, which is a pretty good price for silvers.  When I fished my own boat, silvers were 25 cents a pound.  (Ever notice that keyboards don’t have a “cent” sign anymore?  Have to spell it out these days.  Sign of the times?)
Anyway, it was kind of a funny season.  The chums never really did show up much in the Sound (Prince William Sound), the reds died off early.  The silvers were late and small, but I hear now that it’s blowing 50 out there and the buyers are all packing up, they are finally showing in their 10-12 lb average.  I could see a handful of boats fishing silvers at Ester in the Sound when I was on the ferry last week.  I guess a guy could scrape up a few if he didn’t mind also picking dark toothed humpies.
My highlights of the season were the 50lb king we caught gillnetting, heading to McCarthy, for a writer’s conference and performing last weekend at Kenai Fisher Poets, 2011. The Peninsula Clarion wrote a great article about it with a YouTube clip: http://bit.ly/n0Tdlj.  I’m at the very end. 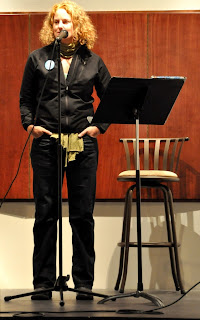 As for me, I’m a short-timer here in the ‘dova. No more driving into town like yesterday when a little black bear ran out in front of me, then I had to stop at the city airport because the road runs right next to the runway and a helicopter was landing.  After that, I drove out the road and a moose jumped out and trotted down the road in front of me for a good minute! No, I won't be seeing things like that this winter.
Last month, I sold Large Marge the Land Barge, my 1988 24’ camper that I called home for the past 5 months.  Got rid of a bunch of stuff, rented out my condo in Anchorage and am packing up the truck.  I take off next week for a 4000 mile road trip from Valdez to Ohio with my cat, Hunter.  I’ll drive through the Yukon hitting hot springs and camping along the way. The B.C and Alberta where I plan to hike a bit around Jasper Nation Park then drop down into Montana, and east to Ohio from there.  I have friends along the way that I can stop and visit once I get back to the states.
From Ohio, it’s down to North Carolina where Vince’s boat is waiting for us.  We’ll (as in he’ll) work on it a bit then sail it south along the Intra-Coastal Waterways into Florida then over to the Bahamas for the winter.  It will be a great trip and I’m really looking forward to it and to warmth and sunshine!  Vince, though, is worried that I won’t regard him as skipper and take his orders.  I said sure I’ll take your orders!  What would you like a short or tall?  More ice?  How would you like your steak cooked?  He just mumbled something about mutineers walking the plank and rolled his eyes.
So stay tuned!  Now that the fishing season is done the adventure really begins because here at PickFish Tales, it ain’t all about fishing…….
Posted by pickfish at 7:40 AM

Very nice season recap! I am now following you:-)