Anyone remember that at the end of some Ozzy Osborne song?  Well, it's become a reality for me.  I call it "Project Egg".  I recently purchased (gotta love Craigslist, best thing since sliced bread, if you ask me) a 1971 12'x7' camper. However,  I'm doubting this thing was built even that recently.  Maybe mid 60's?  Anywho, the plan is to remodel  it, throw some creature comforts and necessities in there, drag it over to Cordova  and call it home sweet home for the fishing season. 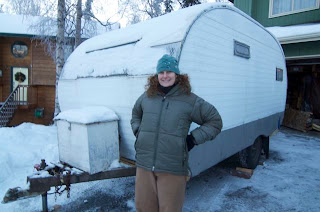 Chris, the gal I bought it from had gutted it, insulated the s*!t out of it, made a few rudimentary necessities, threw a in a heater and lived in it in her friend's driveway in East Anchorage all winter.  One  fact I like to point out whenever someone tells me I'm crazy for planning to live in this thing for the next 5 months is that she lived in it in the winter!  If someone calls me crazy first thing I do is point out someone else slightly more crazy than I am. It helps take the heat off.  The second fact is that this camper in a foot wider, thus bigger, than the cargo trailer I lived in last summer in Cordova.  And, unlike that trailer, this one has insulation.  Thereby proving, that while I may be crazy, I am slightly less crazy than I was last year.  You see, we all live and learn. This is what it looked like when I first got it. 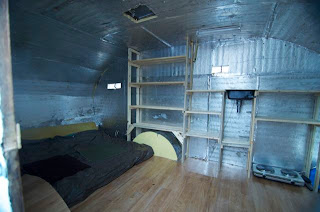 My idea is to re-do some of the insulation and tack up some sort of covering over it.  If I don't I fear eating the insulation will become Hunter the cat's favorite past time.  I decided to go with 1/8" mahogany plywood.  It's not too heavy, expensive and is somewhat flexible.  Next, we designed a bunk, dinette, closet, and sorta designed a kitchen space.  That part is still a work in progress.  Well, ok, the whole thing is a work in progress.
First thing we (I roped my guy, Vince, into helping) did was rip out the second layer of insulation.  About half way through this project I realized this whole thing undertaking is indeed a bit more than I initially anticipated.  But, I'm committed now and too stubborn to turn back.  This is our progress. 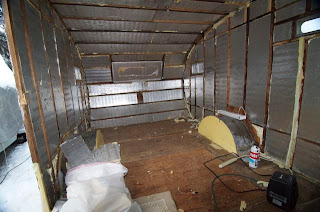 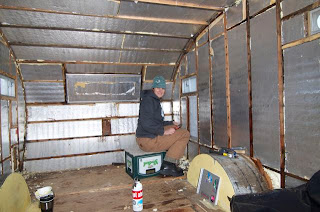 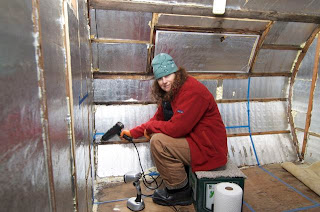 That worked well, but the novelty of that wore off in about an hour.  We turned to the Mr Buddy propane heater that came with the trailer.  It worked great! Who knew there was all that ice under the insulation?  Until....wait a minute.  Was the ceiling black before turned the heat to high? Probably not. Settling on medium heat and some fans, we went this that. Not quite as effective, but less likely to burn the Egg down.  A few days later, I think we've finally made some headway, but not enough.  As luck would have it, the outside temps went from 10 degrees to about 35 and we were able to open all the windows and just let it air out. And, finally,  it looks dry inside.  Then I sprayed some mold and mildew killer, just in case.  In the meantime, I'm varnishing the panels with Minwax Polycrylic  and deciding on fasteners to use that aren't too hard on the eye. Aesthetics are everything! Such is the case with this Chicken Air tee-shirt screwed to the door as a curtain.
All the panels are now varnished and we will be hanging them this weekend and starting to build the bunk.
Tune in next week to check out our progress. 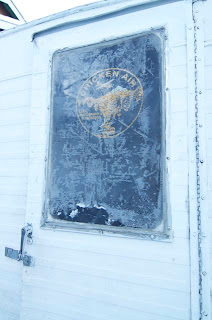 Hey that egg is bigger than the cabin of my boat and I'll be living in it all summer. Looks like it will be great digs to me!

This is AWESOME! My husband and I have been dreaming for years of getting something like this. Can't wait to see how it turns out!

I've received some pretty funny comments about this post via email and whatnot that are just too funny not to share, so here they are:

"what do you think you'll end up with when it hatches?" -SD


The egg is looking good.

I'm just fine with being your mental scapegoat. Turn about is fair play. I use you to tame down the craziness of my spending my time in the egg.
'Yeah, I know that look. But this lady bought it and she's going to live in it too. Longer than me! And... and... she lived in a utility trailer before. So I'm not the only nut in the world!'

Turns out, it was more work than I ever thought humanly possible! I ended up just getting it sell-able and got a bigger camper. However, if you have a lot of time, no time line, and like to tinker, it would be a good project for ya!

Btw, I love your blog!