Its Arrived!  My article in Pacific Fishing!  Admittedly, it was a bit weird  writing an article about an event that I was a part of, but hopefully, I pulled it off OK.  You be the judge!﻿ 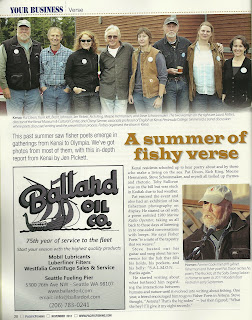 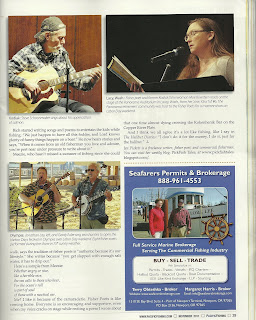 This past summer saw fisher poets emerge in gatherings form Kenai to Olympia.  We've got photos from most of them, with this in-depth report from Kenai by Jen Pickett
A summer of fishy verse
Kenai residents schooled up to hear poetry about﻿ and by those who make a living on the sea.  Pat Dixon, Rich King, Meezie Hermansen, Steve Schoonmaker, and myself all trolled up rhymes and rhetoric.  Toby Sullivan was on the bill but was stuck in Kodiak due to bad weather.
Pat emceed the event and also had an exhibition of his fisherman photography on display.  He stared us off with a poem entitiled 1980 Marine Radio Opepator, taking us all back to those days of listening in to one-sided conversations with beeps.  He says Fisher Poets "is a taste of the tapestry that we weave."
Steve busted out his guitar and sang about his reverence for the fish that fills his holds, his pockets, and his belly: "S.A.L.M.O.N...thanks again."
He started writing about what bothered him regarding the interactions between humans and nature until it evolved into writing about fishing.  One year, a friend encouraged him to go to Fisher Poets in Astoria.  Steve thought "Astoria?  That's the big rodeo" -but then figured, "What the hey?  I'll give it my eight seconds."
Rich started writing songs and poems to entertain the kids while fishing. "We just happen to have all this fodder, and Lord know plenty of funny things happen on a boat."  He now hears stories and says,"When it comes from an old fisherman you love and admire, you're pert near under pressure to write about it."
Meezie, who hasn't missed a summer of fishing since she could walk, says the tradition of fisher poets is "authentic becuase it's our lifestyle."  She writes because "you get slapped with enough salt water, it has to drip out."
Here's a sample from Meezie:
Whether angry or nice,
like a horrible vice,
the sea calls to those who hear,
For the ocean's roll
is part of soul
of those with a nautical ear.
Me? I like it because of the comaraderie.  Fisher Poets is like coming home. Everyone is so encouraging and supportive, even when my voice cracks on stage while reciting a poem I wrote about that one time almost dying crossing the Kokenhenik Bar on the Copper River Flats.
And I thnk we all agree it's a lot like fishing, like I say in the Halibut Diaries: "I don't do it for the money, I do it, just for the halibut."﻿
Thanks for tuning in!  If you enjoy my blog feel free to "follow" here, leave a comment "like" me on Facebook under Pick Fish or follow me on Twitter: @Pickfysh.

Until next time, eat fish!
I'm out.

Awesome, Jen - congratulations on your big debut! And not only did you successfully write as a participant/author, I think it's fantastic that this article was written by someone who truly loves and "gets" Fisher Poets. Authentic in a way that an outsider couldn't have conveyed. (And it makes me super-excited for this February's road trip to Astoria!) Cheers to publication - the first of many such moments!

Roger that!. At first I was just covering the event, then it occured to me to write it from an insiders perspective. I'm glad you think it worked. I hope other's enjoy it. And I hope its first of many.
Thanks again!

This was precisely the answers I'd been searching for. Amazing blog. Incredibly inspirational! Your posts are so helpful and detailed. The links you feature are also very useful too. Thanks a lot :)

I am not sure where you are getting your information, but good topic. I needs to spend some time learning much more or understanding more. Thanks for fantastic info I was looking for this information for my mission.

Thats good, your blog is cool, i like it. Thanks for the efforts my friend.
[url=http://androidphone7.livejournal.com/]Android Phones[/url]

What a skilled word smith to make fish tales so entertaining! Humor, insight and knowledge come pouring forth in steady stream. Great job! Keep it coming.

Thanks for such a nice comment. Glad you are entertained!

You have made a great website about fishing.I have visited many websites but this is the best so far.
Fishing Rod to catch fish