I heard once that baseball players don’t change their socks during a series as its bad luck. Fishermen are the same way with their hats.  At first, like any greenhorn, I didn’t know this.  I would simply fish in any old hat until someone pointed out to me that I had a lot of audacity just changing hats like that and tempting fate.  Clearly, I needed a fishing hat.  You had to put some thought into the hat that would be the only hat on your head the next few months so obviously, not any old hat would do.
I racked my brain, almost to the point of losing sleep, in order of selecting the perfect hat.  Okay, actually it wasn’t that hard of a choice.  I only had one hat with me.  It was a blue ball cap that had “24/7/365” on the front.  Being that that is pretty much every fisherman’s work schedule, I thought it was fitting. Problem solved, I had the perfect fishing hat.  Until. 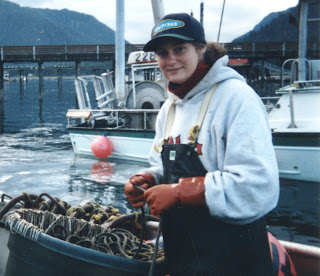 That next spring when I returned to Alaska at the start of the season, I searched high and low but to no avail.  I had lost my fishing hat.  Back to square one.  I think I had a few interim hats until I again, found the perfect fishing hat.
Granted, finding the perfect hat is probably not such a feat for other fisherman as it is for me. But, I have a pin head and most hats are too big, thus narrowing the selection of cool hats down to only a few.  However, fishermen have perseverance and I continued my search as if my life depended on it.  And who knows, maybe it did.
Alas, I knew it as soon as I laid my eyes on it.  Ah, yes, I still remember it today.  I walked into Lee’s Clothing store in Petersburg and it was love at first sight.  There was my fishing hat and it was just right.  It was a tannish beige color with three brown letters on the front.  Very elegant.  And like the other hat, it made you stop and think for a second.  Only one step better, with this hat you had to be in the know to know that those letters meant. The three letters were “PSG”, the indentifying city code for Petersburg, not only used at the airport but also used on the Alaska Marine Highway, the ferry system. 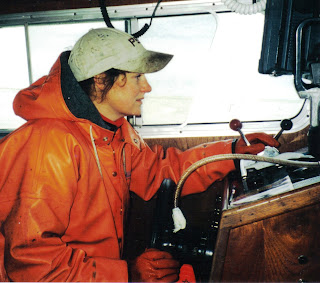 I was in heaven, in love with my new hat for the reason that, one, it fit, and two, local pride.  Fishermen take pride in where they hail from.  It can almost be like a school rivalry, Petersburg, Wrangell, Sitka, Ketchikan.  And I was labeled PSG.
I wore my colors proudly for years.  I would tuck my pony tail though the back of my hat, anchoring it onto my head.  If the wind caught the bill and blew it off, as happened often enough, my hair would catch it long enough for me to put it back on my head.
Later, when I expanded my fishing routine and started going up to Bristol Bay, Kodiak and Cordova, the hat became a bit of an icebreaker.  “What is PSG?” they would ask.  “Petersburg” I’d reply with pride.  It’s a status quo, really. Then the other fishermen would know that I have fished other fisheries and I was not a greenhorn, a status that I felt I had to constantly reestablish.  But, that’s a story in itself and one for another time.
Anyway, I must have had that old hat for about 5 years or so, well until I had my own boat and it had served me well.  I was bummed when I lost it I never thought I would see it again.  Until one day, a year later, I was fishing around under the seat of my car when lo and behold.  There it was!  Tune in next week and I’ll tell you about the luck that hat brought me.
Until then, eat fish!
Posted by Jen Pickett at 8:40 AM

First time and the hat are great stories for me. Gaining knowledge and a smile everytime you put up a post.

Thanks for the comment! I'm glad to make you smile. I just went to your blog. Looks like you have quite an adventuresome life! We are about to emark on something similar. Stay tuned for my new blog The Mug up ~Jen