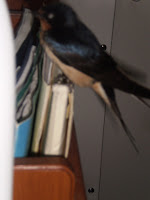 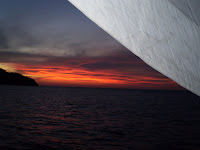 And we were indeed delighted to finally be off and sailing again! With only a few minor injuries from pushing the skiff through the surf (mine was very minor, a scrape on the shin, but it left a funny purple scar visible now when I wear a skirt) we were ready to pull anchor. We, as in Gary. That’s his job. He heaved-ho by hand the 35 lb Dansforth anchor and 100+ feet of anchor chain and line. Just in time, too as we could see a black cloud coming our way. Not weather, but soot from burning sugar cane. We motored away just as the black ash started to sprinkle the decks.

We motored out of the anchorage, dodging boats left and right. Clearing the point, we raised the main sail then the jib. Killing the engines, always a moment I savor on any boat, we found our course. A 700 mile straight shot at 359 degrees takes us to Huatulco, Mexico.
Well, the saying “Red skies at night, sailor’s delight” was wrong. It wasn’t long before we were in 25 knot winds with gusts up to 35-40. Lessons learned sailing in a gale:
1. How much power the wind has
2. That it’s all but impossible to steer a 55’ cat into the wind when 1 engine won’t start
3. How much noise a sail makes as its getting ripped to shreds
4. What an accidental jibe is
5. That one will toss a 6’4” man around like a ragdoll
6. That even getting almost launched overboard in gale force winds and 4’ seas still doesn’t cause Mr. Laidback California to lose his cool.

After we got our asses handed to us, we did finally manage to get the main down, and it stayed down for 2 days until it finally let up enough to repair it. Sailing with only a jib didn’t get us very far, but we didn’t have a choice. Once the wind stopped, we raised the main, accessed the damage and got out the repair kit. We had three significant rips to patch up. We worked as quickly as possible so we could finish the necessary mends before the wind picked back up. And the next 8 days were spent with a fully raised main and no wind. While it’s frustrating to sail slower than one can swim, there are some perks. Viewing lots of wild life is one of them. We were practically sailing through turtle soup! We saw about 50 turtles a day, nearly running over most of them. And dolphins by the dozens would come and swim next to the boat. One was an amazing acrobat. It would jump about 10’-15’ out of the water while doing flips! It was quite a show. Another appeared off the starboard side of the boat and spy hopped, which is a slow and controlled movement akin to a human treading water. The dolphin raised and held position partially out of the water, exposing its whole head and look inquisitively at the boat, and perhaps me. We also had a few stowaways of the feathered variety. One even made himself at home down on the chart table for the night. Lets us little presents, too.

Limited money equals limited fuel. Limited fuel equals limited motoring. We sailed as much as humanly possible and only used the motor to charge the batteries of the boat and when absolutely necessary. Like during my 4 AM wheel watch when I had to stare at a red light on the beach that never moved past us after three hours. I thought I was going to spend the rest of my life gawking at the red light. I had to fire up the engines and motor past it. Turns out, we were stuck in a river current and would probably still be there had we relied solely on wind.

Taking a straight shot from Costa Rica to Mexico allowed us to bypass Nicaragua, Honduras, El Salvador, and Guatemala. We wanted to avoid the infamous red tape of entering these countries, especially the Nicaraguan Navy, who will board you and site you for anything and everything. But, we were 60 miles off shore when we passed Nicaragua, so we were safe.
After nine and a half long days of sailing and round the clock wheel watches (OK, we did get to tie the wheel off a few times and both get a nap) we arrived Huatulco, Mexico. Well, we arrived seven miles off shore of Huatulco. Under normal sailing conditions that would take less than an hour. With our lack of wind curse, it took us a maddening eight hours. Finally arriving just outside the harbor, we dropped the sails and fired up the engine to motor in. After docking, we checked our fuel levels and discovered we didn’t have any! We must have motored in on fumes. Later, we had to haul our fuel jugs, by foot, up to the gas station for diesel. Returning to the boat by Taxi with a trunk full of diesel, we lugged them back down to the boat and fueled up for the next leg of the journey.

Entering Mexico in Huatulco is about as pleasant experience as it gets. Instead of running around to various offices, everyone comes to you. We had Immigration, Customs, International Health, and someone government office aboard, all at once! This may sound intimidating, but mostly it was young giggly girls who flirted with Gary as they gave us all our proper stamps and paperwork. The trip to the Port Captain, on the other hand, was a different story as was the usual hassle. Nevertheless, we got all checked in and it felt good to be on land again after almost 10 days of sea.

Huatulco is a tourist town in the southern part of Mexico, in Oaxaca State. Unlike most Mexican towns, Huatulco exhibits signs of city planning and landscaping. It’s freshly groomed, trimmed, and hedged. Almost like a Mexican version of San Diego. After spending a few days exploring, (most of which, I was still rocking) we had our fill of burgers and beer, we grabbed some grub and were ready to take off. We both took one more nap and left at 11:59 PM so we wouldn’t get charged for another day at the marina. And we were off for Zipolite, Mexico!
Posted by Jen Pickett at 9:58 AM